From Istanbul with a1.5 hours drive and taking the ferry across the Izmit Bay.

Historically known as Nicaea, İznik lies in a fertile basin at the eastern end of Lake İznik. The town became a major center with the creation of a local faïence pottery-making industry during the Ottoman period in the 17th century. Iznik tiles were used to decorate many of the mosques in Istanbul designed by Mimar Sinan.

Bursa, the fourth most populous city in Turkey, was the first capital of the Ottoman State between 1335 and 1413. The city was referred to as Hüdavendigar (meaning “God’s gift”) during the Ottoman period, while a more recent nickname is Yeşil Bursa (meaning “Green Bursa”) in reference to the parks and gardens located across its urban fabric, as well as to the vast and richly varied forests of the surrounding region.

Iznic was surrounded on all sides by 5 km of walls about 10 m high. These were in turn surrounded by a double ditch on the land portions, and also included over 100 towers in various locations. Large gates on the three landbound sides of the walls provided the only entrance to the city. Built during the reign of the Roman emperor Vespasianus in the 3rd century, Istanbul Gate actually has 3 gates side by side. It features huge stone carvings of heads facing outwards.

Hagia Sophia (“Holy Wisdom”) is a Byzantine-era church. It was built by Justinian I in the middle of the city in the 6th century, modelled after the larger Hagia Sophia in Istanbul. It was in this building that the Second Council of Nicaea met in 787 to end the first period of Byzantine Iconoclasm. The building was converted to a mosque after the fall of the city to the Ottoman Turks in 1337, and functioned as such until it was converted into a museum in 1935. Since November 2011, it again functions as a mosque.

This Gate to the east actually comprises three gateways dating from Byzantine times. The middle one bears a Greek inscription that says it was built by Proconsul Plancius Varus in AD 123. You can climb to the top of the walls here – a good vantage point for inspecting the lie of the land.

Photography Break at the City Walls 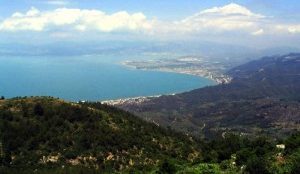 Drive to Bursa along the south shore of Iznic Lake. 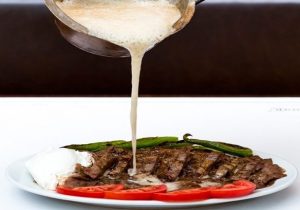 As one of the most famous meat dishes of northwestern Turkey, this kebab takes its name from its inventor, Iskender Efendi, who lived in Bursa in the late 19th century. It is a kind of doner kebab prepared from thinly cut grilled lamb basted with hot tomato sauce, over pieces of pita bread and generously slathered with melted sheep butter and yogurt. Tomato sauce and boiling butter are usually poured over the dish, at the table. It is commonly consumed with sira (a Turkish non-alcoholic drink made from slightly fermented grape juice) as a drink which helps digestion.

The largest mosque in Bursa and a landmark of early Ottoman architecture. Ordered by Sultan Bayezid I, the mosque was designed and built by architect Ali Neccar in 1396–1400. It is a large and rectangular building, with a total of twenty domes that are arranged in four rows of five, and are supported by 12 columns. Supposedly the twenty domes were built instead of the twenty separate mosques which Sultan Bayezid I had promised for winning the Battle of Nicopolis in 1396. There is also a fountain (şadırvan) in the mosque and its dome is capped by a skylight which creates a soft, serene light below; thus playing an important role in the illumination of the large building.

Bursa’s bewildering covered bazaar, which extends in all directions through halls, into courtyards, down underground, along tiny passages and onto upper floor terraces looking down on tea gardens. At the centre of this covered bazaar, the bedesten (vaulted, fireproof enclosure for valuable goods) was built in the late 14th century by Yıldırım Beyazıt, although it was reconstructed after an earthquake in 1855. The market is renowned for its high-quality towels and bathrobes.

The mosque was built by prominent architect Hacı Ivaz Pasha at the request of Ottoman Sultan Celebi Mehmet between 1415 and 1419. Its ornamentations and handiworks were made by the period of great painters Haci Ali and Ilyas Ali. Also the grand artist Mehmet Mecnun furnished that spectacular mosque with splendid tiles. Established by Sultan Çelebi Mehmet in 1421, Green Tomb is placed on the hill accross to the Green Mosque. Its architect is the skilful artist Haci Ivaz Pasha. This tomb, which is one of the most important mausoleums in Bursa, is called “Green” because it is beautifullyy covered with green tiles.